1st of May is public holiday in Spain (as in around 80 countries in the world). I managed to make some hiking at Cabeço d’Or, a mountain near Alicante. Typical of me, I also took some photos: 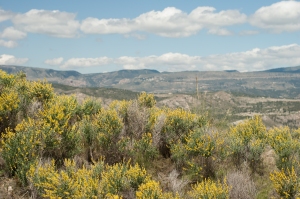 With a refreshed mind I can happily go back hacking my new open source creature, ShadingZenCpp a cross-platform C/C++ library meant to speed up some portions of ShadingZen 3D Engine.

Moving some of my projects to the wild, I mean to GitHub, has made me realize what others already knew, much of the software we use everyday is open source or has some roots there. Be honest, peeking to someone else’s software is great. As to my own experience I started learning programming as a child reading the source code of the Doom Editing Utilities (and that probably shifted and twisted my understanding of computers for my entire life). This concepts of seeing others work and learning from it is a hidden fact that affects our life in for example every gadget we use (read Android/iOS). But not only to learn but to understand what a piece of software does, its source code is the ultimate documentation. If you are using a third party library, ask for its source code and peek at it when needed. At Video Stream Networks we made a similar approach, we had our domain logic code written in C++ every time we had to tune it for every customer’s workflow it made us feel miserable. After we moved our domain logic into Casper, a Domain Specific Language for the media and broadcast world, our customer can not only peek at what our app does but understand and fine tune it themselves.

Thanks to GitHub and the Open Source Community, ShadingZen Engine is slowly maturing. The GitHub repo received a pull request with some great changes. The project now has Maven build, the structure is more clear with all the examples and documentation centralized in just one repository and the eclipse requirement has been removed (This last point allowed me to try out IntellIJ IDEA which so far I find as a really good java IDE).

Yes, open source level editors as well a robust designed and extensible engine was behind the success of DOOM, the very same that made some of us programmers.

Development of ShadingZen is approaching version 1.0 beta 2 and a new minor update has been rolled out and ready to be cloned/forked by you at ShadingZen’s GitHub repository.

The primary goal for this milestone (v1.0 beta 2) is to provide better documentation, ranging from API documentation to useful examples for the wiki.

Secondary goals are to improve performance, mainly in areas where we can use object pools to avoid garbage collection frame rate drops. In fact, RenderTasks have been refactored and now use a global shared pool manager which creates and reuses RenderTask objects. This gives a performance boost but increases memory usage.

ShadingZen is a 2D/3D Engine for Android OpenGL ES 2.0 and is open source under the MIT License. 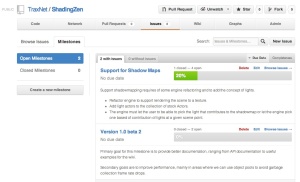 Embedding programming has never been easier after the introduction of modern mobile APIs like Android SDK and iOS SDK. Nevertheless for realtime applications new areas for potential bottlenecks may arise as those extra layers add more complexity to your application.

A clear example may happen with the Dalvik GC (Garbage Collector), which coupled with a realtime 2D/3D Engine generating many objects for each frame, will (for sure) showcase frame drops when the GC hits in. This is hard to solve as Java makes really easy to create new objects that encapsulate your required functionality but hides from you how and when the memory will be collected. Hey! it creates objects everywhere, for iterators, enums, sorting alogrithms…I personally think Dalvik needs some improvement in memory management areas but meanwhile we just need to avoid those problems and minimize them as possible.

Dont create objects! No, seriously, don’t create new objects in your game loop. Use object pools as much as possible. This is an area ShadingZen engine is improving and is one of the reasons you should always create new actors using the “spawn” method.

Don’t call your own methods, use the objects properties within the objects code and use methods to access functionality from outside. Also avoid using getters and setters, but pack functionality in just one method call instead of using the getted property from outside. For example if you want to make an actor explode you may need to compute explosion velocity and actor final destination from outside. Instead create a “makeExplode” method for that and compute everything within the object code. Dalvik makes calling methods slow.

If you are using OpenGL ES avoid changing states, pack drawing calls sharing the same state and run them at once.

DDMS is your friend. I know how much you hate its awkward interface but you need it, profile often!

Check this paper as it contains basic guidelines to avoid performance bottlenecks in your realtime applications: http://dl.google.com/io/2009/pres/WritingRealTimeGamesforAndroid.pdf

Performance is an area the next version 1.0-beta2 of ShadingZen is receiving much love. 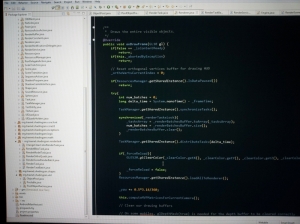 I’m showing you the code!

I have decided to open source my 2D/3D engine for Android and it is currently available at GitHub under the MIT License [put random reason here].

The goals behind ShadingZen is to offer a simple framework on which you can build mobile games easily, but without leaving behind performance reasons like stressing out multicore mobile CPUs found in modern phones/tablets. I have borrowed some ideas found at Cocos2D that I just find really useful, like Actions and Transitions.

I’m using my spare time to create some HOWTOs and examples. I would also like to write down some core concepts of the engine. For more info keep an eye to future changes at the GitHub wiki here. 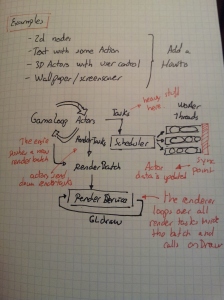 Oscar Blasco is a software engineer and an entrepreneur.

This blog is all about technology, mostly software development technologies.